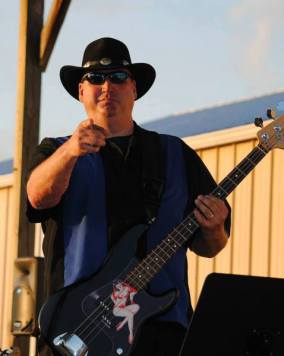 Big Daddy Dupree was born and raised in Chicago, the home of the Blues. In 1990 he moved to the Southside and discovered the Blues. He was a fan of the Blues until 2006 when at the tender young age of 41 he picked up the bass and started playing. After four lessons he had the basics down and has been self taught ever since.

Big Daddy is a hard driving, soul infused bass player who brought the Blues to Leesburg, Indiana in 2007. Since 2008 his playing has improved exponentially due to the help of his guitar coach, Scott "Scotty Rocker" Hardy.

"Scotty Rocker has not only taught me to play guitar, he has also taught me about amps, sound systems, building a band, promoting a band and much more. He has been a great friend and a fantastic guitar coach." ~ Big Daddy

Big Daddy has left the area to continue his work in Country Club Management but the band/ family is wanting to continue on and make him proud. Paul will always be a big part of this band he created. We all love and will miss our Brother Paul and his queen Julie.

This was Big Daddy's first band and he hopes to keep on playing the Blues until he is invited to the "Big Blues Jam" in the sky. ﻿

HD Campbell, One of the Two Founding Fathers Retires

"HD you were the original voice of the Broke & Hungry Blues Band from the beginning. I have really enjoyed the time we spent developing and growing this band into the high powered Blues explosion it has become today. I will miss sharing the stage with you and the countless hours we spent practicing together in the studio. You are a great friend, a very talented musician and I will cherish the memories and your friendship until I go to that big Blues Jam in the sky.” Mad Love & Respect ~ Big Daddy Dupree 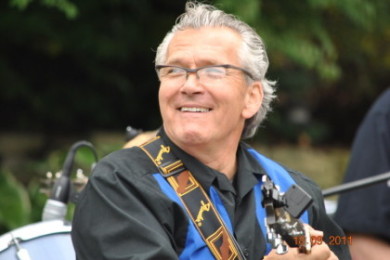 HD Campbell was forced to take piano lessons by his parents as a child. He played for a couple of years and gave it up. His parents reminded him, “If you quit the piano, you will be sorry”. Looking back, he was sorry that he quit.

As a teenager he began to play the guitar and picked it up pretty quick. At the age of 20 he moved to San Francisco and continued to improve his skills. While in San Francisco he would listen to the Blues on station KSAN. Along with the Allman Brothers, Van Morrison, BB King and all of the Blues greats, KSAN turned out to be the greatest influence on him. It was then he was officially hooked on the Blues.

25 years had passed and not once did Scott pick up a guitar. That is until he hooked up with Big Daddy Dupree. Like most bands, two guys got together and started jamming one night and the rest is history in the making. Scott is now the “Quarterback” of one of the most high energy and hard driving Blues band in all of Indiana.

"I love the fact that I got to play the Blues with a great bunch of guys!" 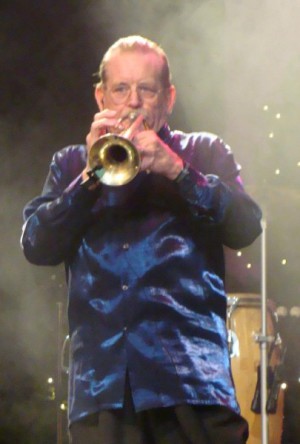 John Larson- Trumpet player for the Broke & Hungry Blues Band from May of 2009 until he passed. John died Wednesday September 21, 2011 of complications from cancer. He was 61.﻿

"John Larson has played trumpet with us for the last three years. The last gig we played with John was on August 20, 2011, three weeks before his passing, to raise money for a local lady dying of cancer. Even in his final days, John gave of his time and talent to help others. On behalf of the band, John may you rest in peace and know that you will be missed. It was truly an honor to share the stage with you the past three years. I wish I could know half of what John has forgotten about misic. He was a true professional and a very funny guy.

John was most famously know as lead trumpet player for the iconic Chicago rock band Ides of March, John Larson was the driving force behind the band’s 1970 hit “Vehicle.”

“He was full of personality,” Ides of March founder-songwriter Jim Peterik said Thursday. “When I introduced the band, I’d call him ‘Nick Nolte’s evil twin’ because he kind of looked like Nick. We poked innocent fun at him because his personality was so whimsical. We had a riot.” The Cicero native joined the Ides in 1968 and remained with the band until his last gig, which was in mid-2010 for the band’s “Still 19” CD release party at FitzGerald’s in Berwyn. Mr. Larson was in his old neighborhood, and despite health struggles he was in the pocket. He was a pro.

“We were all in high school bands together and practiced in the Morton East band room,” said Peterik, who was a Morton West student, but the two schools rehearsed together. “There was this blond trumpet player sitting in the first chair [from Morton East]. The Ides had just started getting into soul music. It wasn’t about trying to be the band Chicago. We grew up at the same time as Chicago, but we were trying to emulate the Muscle Shoals-Stax Volt sound. We wanted to do ‘Sweet Soul Music,’ James Brown stuff, ‘I Feel Good.’ So we got one trumpet, Chuck Somar. We tasted the brass and wanted another trumpet.” Peterik asked Mr. Larson to audition in the basement of Ides vocalist-bassist Larry Millas. The Ides had formed in 1966 after a brief run as Batman and the Boy Wonders. The band’s breakthrough was Peterik’s idea to supplant mid-1960s rock harmonies with horns.

“Those high notes John hit could shatter glass,” Peterik recalled from his home in the southwest suburbs. “And we said ‘You’re in.’ He became a full-fledged member of the band.” When Peterik later wrote “Vehicle,” Larson’s chops proved crucial. “His piercing tone was the perfect complement to Chuck and [bassist Bob Bergland’s] more mellow sound,” Peterik wrote on his website Thursday.

John is survived by his wife, Patsy, and mother, Evelyn.﻿ 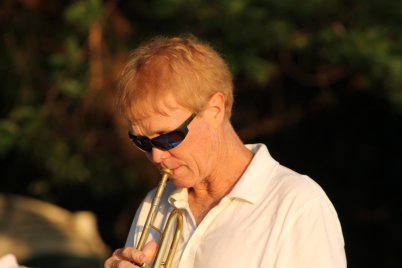 Rob Johnson was the Trumpet player for Big Daddy Dupree's Broke and Hungry Blues Band since 2011. He lost his battle with Cancer on Tuesday January 8, 2019. His three favorite past times growing up in Syracuse, Indiana were playing the trumpet, golfing, and skydiving. He had a music major from ISU.

Some of the bands he has been a member of besides Big Daddy Dupree's include; The Whistle Pigs Band, Short Term Memories, Kelly Jay Band, and The Brass Menagerie.  He has also been known to play for the Amish Acres Round BarnTheatre in Nappanee.

You can hear some of Rob's trumpet talent on several CDs including Big Daddy Dupree's, The Whistle Pigs Band, Kelly Jay Band, Jilly Jenks CD, and Catman & the All Niters. He always enjoyed jamming with his son (trumpet) and daughter (guitar and trumpet) and golfing.

Rob you will always be on stage with us when we are performing, we miss you and we'll love you always ~  "Big Daddy Dupree's Broke and Hungry Blues Band",